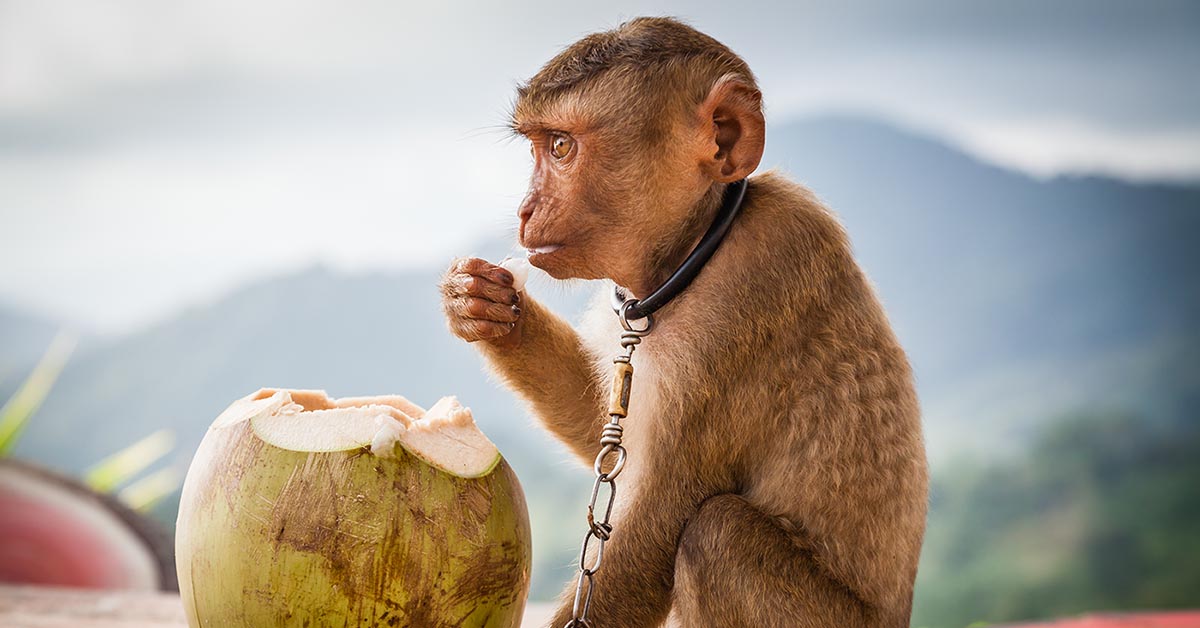 Walk into any suburban supermarket, and you’ll find entire aisles of food you wouldn’t have seen when you were a kid. What the heck is quinoa, anyway? Who invented kombucha? And if mom had served kale, you might have appreciated broccoli more. But there’s one whole category that delights millions, and that’s the case full of milks made from soybeans, almonds, cashews, or anything else but classic “moo juice.” They’re popular enough that dairy interests have sued producers for using the word “milk.” (The case prompted former FDA Commissioner Scott Gottlieb to declare, “an almond doesn’t lactate, I will confess.”)

This week’s story takes us to the shelf at your neighborhood Target, where you won’t find Chaokoh Coconut Milk anymore. Why not? According to People for the Ethical Treatment of Animals, the company forces monkeys to pick the coconuts that go into the milk. The group found “cruelty to monkeys on every farm, at every monkey-training facility, and in every coconut-picking contest that used monkey labor.” The monkeys are “tethered, chained to old tires, or confined to cages barely larger than their bodies.”

Target joins Costco, Wegman’s, Food Lion, and Stop & Shop in discontinuing the product from Thailand’s Theppadungporn Coconut Company. But PETA reports that Kroger, Albertson, and Publix all still carry it.

Naturally, that got me wondering, how would we tax the poor monkeys? (No, I don’t get out very much, thank you for asking.) Collecting half a banana at the end of a long work day seems impractical, as well as a tad cruel. (Fact check: monkeys don’t actually eat bananas in the wild, and some zoos have stopped serving them because they’re too sugary.)

Microsoft founder Bill Gates suggested one answer when he proposed taxing robots that take away human jobs. “If a human worker does $50,000 of work in a factory, that income is taxed. If a robot comes in to do the same thing, you’d think we’d tax the robot at the same level,” he said in 2017. Of course, it won’t be the robots paying, it will be the factory. We can’t imagine robots being any happier about it than we are. (Can you picture HAL 9000 from 2001: A Space Odyssey reacting when he learns he has to fill out a W-4? “I’m sorry Dave, I’m afraid I can’t do that.”)

The same approach could work for all sorts of non-human labor. Budweiser can pay on behalf of their Clydesdales hauling wagons of beer. Circuses can pay for the elephants they train to do tricks. (There won’t be much to collect; everyone knows elephants work for peanuts.) And just imagine Willie Wonka sweating bullets when he sees the IRS coming after his beloved Oompa Loompas!

I’m having fun here, of course. But the story raises legitimate questions about how taxes should respond to changes in our economy. For example: we tax gasoline sales to pay for roads because cars and trucks use gas-powered engines. The more you use those roads, the more you pay. But the cost of batteries has dropped far enough to make electric engines competitive with their gas-powered peers. That gives Teslas an unfair advantage. Perhaps a special tax on electric car chargers could even the scales?

Next time you find yourself at the grocery store, look around and notice how silly some of the choices have become. (Do we really need 25 flavors of Cap’n Crunch? Don’t they all tear up the roof of your mouth?) When it comes to taxes, though, we’re here to help you make the smartest choices, with no high-fructose corn syrup or annoying trans fats!