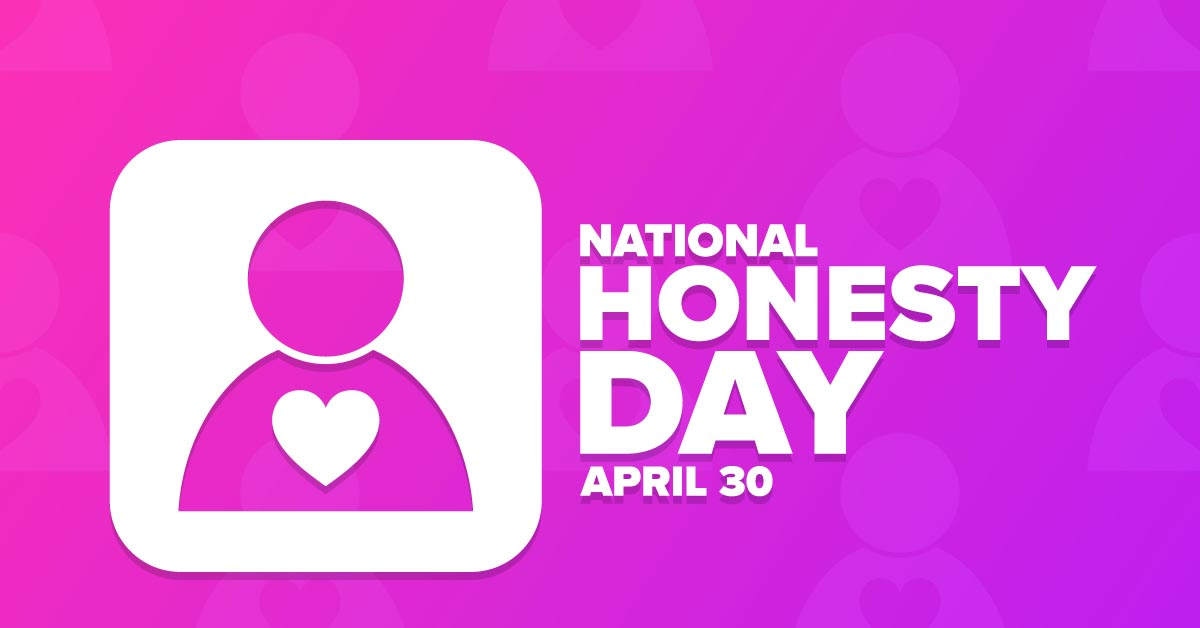 Americans love holidays — so much that if we see a blank spot on the calendar, someone is ready to fill it. Usually, it’s someone with something to sell: would it shock you to learn that something called the National Retail Federation was behind Cyber Monday? (No Virginia, there is no Cyber Santa.) Friday, April 30, is an especially big day for so-called “Hallmark holidays.” It’s National Bugs Bunny Day, National Adopt a Shelter Pet Day, and National Hairball Awareness Day. (If that’s not harmonic convergence, then nothing is.)

April 30 is also National Honesty Day. Author Hirsch Goldberg says he created it back in 1991 to contrast with April Fool’s Day. Of course, he did it while he was writing The Book of Lies: Schemes, Scams, Fakes, and Frauds That Have Changed the Course of History and Affect Our Daily Lives, so he might have been looking to sell something, too. If you plan on celebrating, we suggest you stay away from politicians and timeshare salesmen. And don’t listen to country music — too many cheatin’ hearts!

You know who’s not mocking this very made-up holiday? Our friends at the IRS! The tax system relies on “voluntary compliance”: taxpayers reporting income and deductions honestly. You don’t need to know math to know that could be a problem. So, how are we doing as National Honesty Day rolls around?

A recent survey of 2,000 Americans by Credit Karma found that only 6% had knowingly cheated on their taxes. Respondents were more likely to cheat on a test or exam (25%), a romantic partner (20%), trivia or another game (20%), or by taking the bus or train without paying the fare (8%). Of those who did cheat, 7% omitted cash income, 7% padded their deductions, 5% omitted tips, 5% paid someone else under the table and didn’t report it, and 3% took a chance on not reporting gambling winnings.

Fortunately, most Americans don’t have much chance to cheat. Employers report salaries on W-2s, banks and brokers report interest and dividends on 1099s, and even casinos report jackpots on W-2Gs. The IRS probably knows most of what they need to know long before you file your return.

That doesn’t make the system foolproof. On April 13, IRS Commissioner Charles Rettig told the Senate Finance Committee that the “tax gap” — the difference between what taxpayers owe and what they actually pay — could be as high as $1 trillion per year. The Service had previously estimated that gap at around $381 billion/year. But Rettig mocked those “official” estimates as reading like they’re “from the dark ages,” particularly in today’s era of offshore accounts, passthrough entities, and cryptocurrency.

Naturally, the IRS is working hard to close that gap. But politicians don’t win elections by raising IRS budgets, even though studies show that every extra dollar going to enforcement raises at least seven dollars in tax. So here’s one idea that won’t cost the IRS much at all. Former Commissioner John Koskinen has proposed requiring banks to report business bank deposits like they report interest payments on Form 1099. This would let the IRS verify that businesses are reporting all the income they deposit.

We’ve said before that the tax code is a series of red lights (where you stop and pay tax) and green lights (where you go without paying). The tax gap represents taxpayers running red lights. But what about those who stop at green lights and miss out on legal opportunities to pay less? That’s where we come in. So call us to pay less, and enjoy a slice of cake on National Honesty Day! You’ll be happy you did.