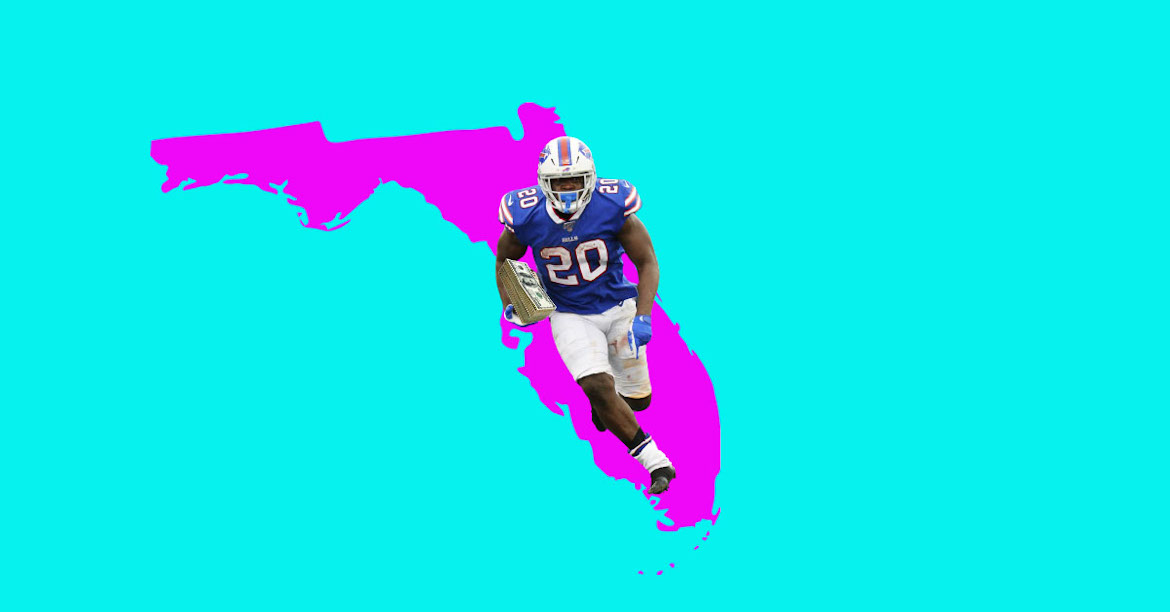 After eighteen long and grueling weeks, the NFL is finally into the playoffs. The Cincinnati Bengals proved they could finally win a playoff game after 31 years. The Buffalo Bills proved that the Patriots without Tom Brady are just another football team. And the Tampa Bay Buccaneers proved that any team is a contender with the GOAT at quarterback, even if said GOAT is reaching an age where other men start contemplating Crestor prescriptions and AARP discounts.

Gamblers across the country look forward to this time of year with the same excitement as a dog with his head out a car window. They’ll dig through all sorts of statistics to squeeze out an edge: “team defensive yards per pass attempt allowed,” “average defensive starting field position,” and “penalty yards per penalty.” But would you believe “home state tax rate” can help predict winners and losers? Let’s go to the tape!

NFL teams play in 22 states, with tax rates ranging from zero in several states all the way up to 13.3% in California. Player salaries start at a $435,000 minimum, with an $860,000 average and a $45 million top end for Kansas City QB Patrick Mahomes. Those state and local taxes are enough to intercept a real chunk of any player’s salary. For example, when Tom Brady signed his $50 million contract with the Bucs, playing in zero-tax Florida saved him an immediate $2.5 million that he would have turned over to his previous home state of “Taxachusetts.”

So, do those taxes really make a difference? In 2011, the Journal of Sports Economics published an article finding that NBA free agents performed better after moving to lower-tax teams than higher-tax teams. But a more recent study by the data aggregators at FiveThirtyEight.com found no correlation between average top income-tax rates and pro sports championships. (The regression test found an R-squared value of 0.0385, whatever that means.)

FiveThirtyEight offers one reason why home-state tax rates may not have much effect. Specifically, most states (and cities with earnings taxes) impose “jock taxes” on visiting players, which means they pay the same as if they were playing for the home team. Even a Miami Dolphin or Jacksonville Jaguar can pay tax on up to half of their games. The same rule applies to out-of-state training camps as well. And they don’t just apply to players! Coaches, trainers, and even broadcasters face the same challenge, except with lower salaries to pay for high-priced help.

Negotiating the jock tax rules can be like trying to return a punt through a crowded backfield. Imagine living in tax-free Florida, playing for the high-tax Buffalo Bills, and visiting to play the average-tax Patriots. That was just “the day after Christmas” this year for running back Frank Gore. In 2018, Sports Illustrated reported: “One All-Pro’s 2016 filing was 400 pages long. He spoke with his tax accountant on a near-daily basis, calling before scheduling a bye-week vacation to income tax-free Florida that saved him $20,000. And this is a guy who has played on the same team his entire career.”

The good news here is that, come game time this weekend, you’ll be able to focus on the stats that matter. It’ll be much more fun to watch the 10-7 Bengals take on the 12-5 Titans than it would be to watch the 13.3% 49ers take on the 7.65% Packers. And if you win enough on the game to make a difference on your taxes, we can help with that, too!